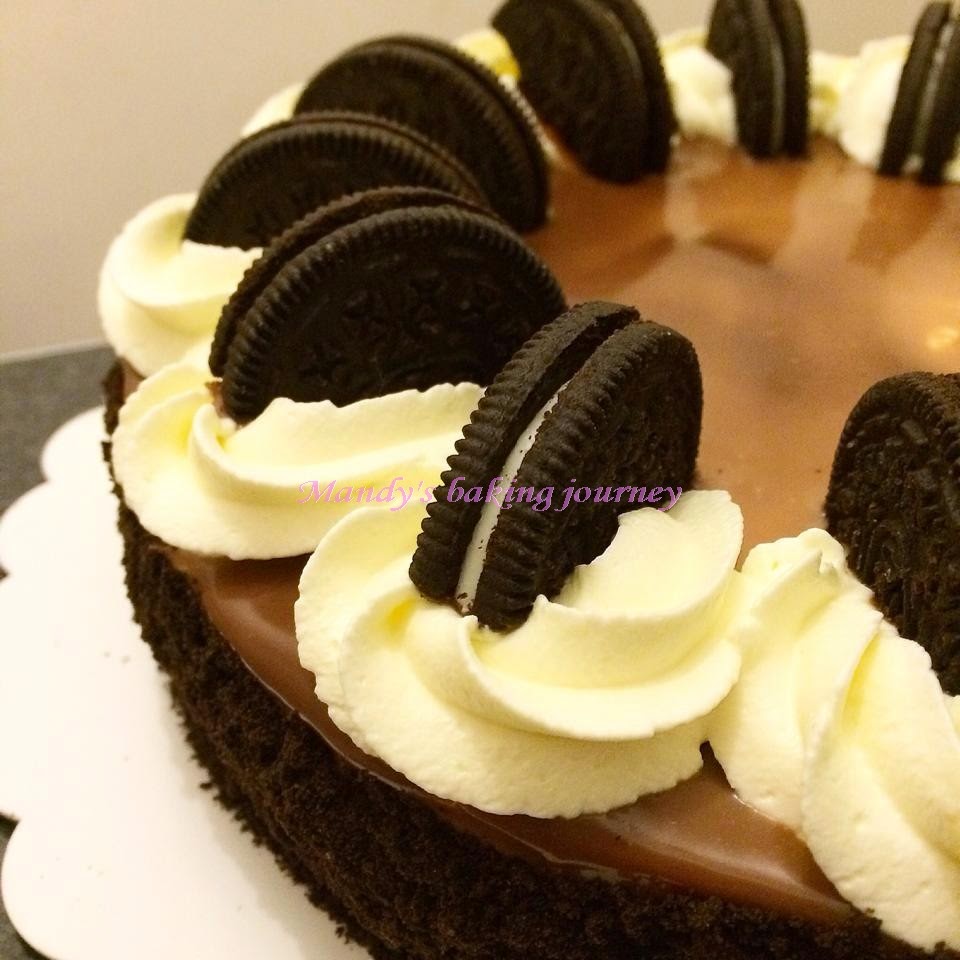 I asked my brother what kind of cake he would like for his birthday this year, he immediately said "Oreo cheesecake!" A Cheesecake for your birthday? Strange request but I guess it's still OK as long as it looks like a birthday cake. So being a lovely big sister, I made him an Oreo Cheesecake!
Kids were excited and as I was in the process of making it, they kept coming over pinching the Oreo biscuits. I've lost count of how many biscuits I used but it was almost 3 packets!!
I can't believe how heavy this cheesecake is and not to mention how many calories it contains!
So, who said cheesecakes can't be used for birthdays! 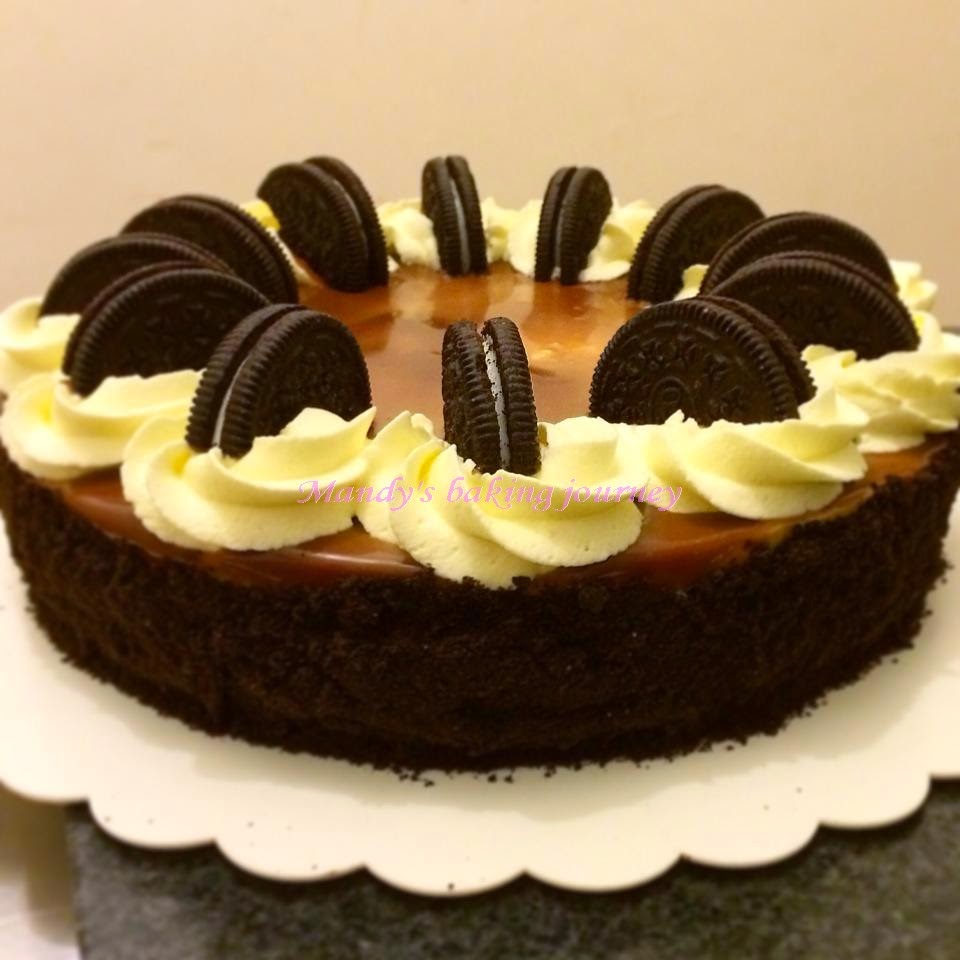 Method:
Line the base of an 8 inch spring form tin.
Crush the Oreo cookies and add the melted butter.
Press firmly into the base of the tin and chill for 30 minutes in the fridge.
For the filling:
300g cream cheese
80g icing sugar
10g lemon juice
50g milk
1 tsp. vanilla extract
200g whipping cream

Prepare the gelatine by softening it in 50g water, let it bloom for few minutes and then dissolve into liquid, set aside.
Make extra crushed Oreo biscuits for the filling and to coat the sides of the cheesecake, cut 6 biscuits in half with a sharp knife for decorating later.
Method:
Whisk the cream cheese with icing sugar the add the milk and combine until smooth.
In a separate bowl, whisk the cream to soft peaks. Pour the cooled gelatine slowly and keep whisking until it has completely mixed in well.
Fold in the cream cheese mixture with the cream then pour in the lemon juice and vanilla extract and whisk quickly to combine.
Add more crushed Oreo's and fold until it is mixed evenly.
Chill in the fridge for at least 5 hours or over night.
Once ready, remove the cheesecake from the tin and add crushed Oreo's around the cheesecake.
Pipe cream around the top and add half a biscuit to decorate.
And it's ready to serve.
It's really is that easy!
Optional
Split the cheese mixture into two.
Add one half with crushed Oreo's and the other half plain.
Pour the mixture with Oreos first then the plain on top and chill in the fridge.
Coat with chocolate ganache recipe is here 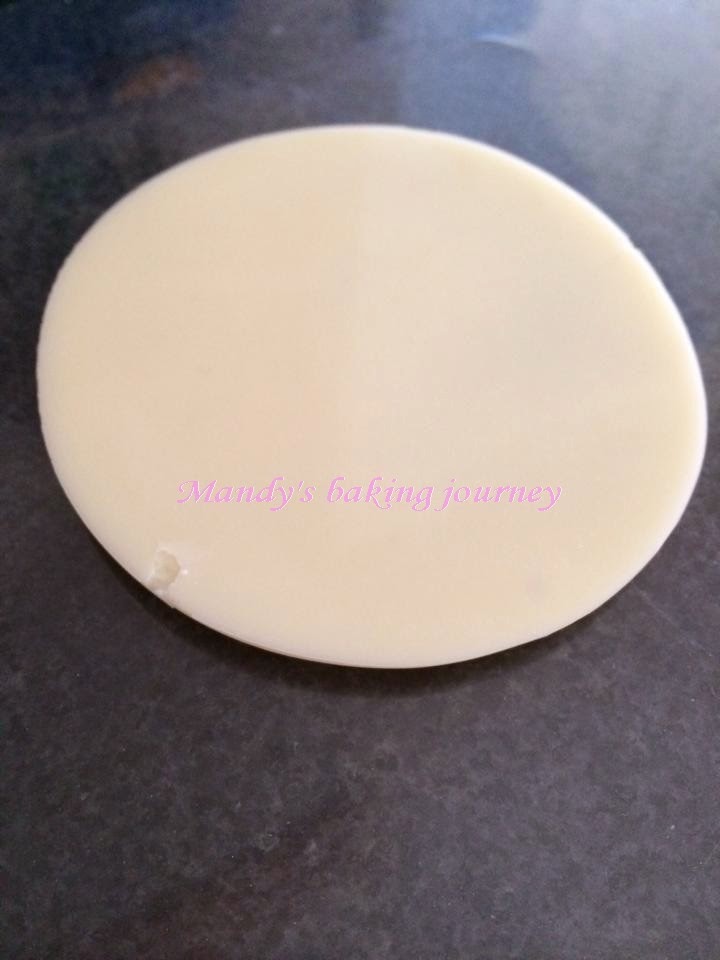 You can make a chocolate plaque by melting white compound chocolates and set on acetate sheets or projector film. This would leave the chocolate a shiny surface when removed, I used to use baking paper and it doesn't give the chocolate a glossy finish.
﻿ 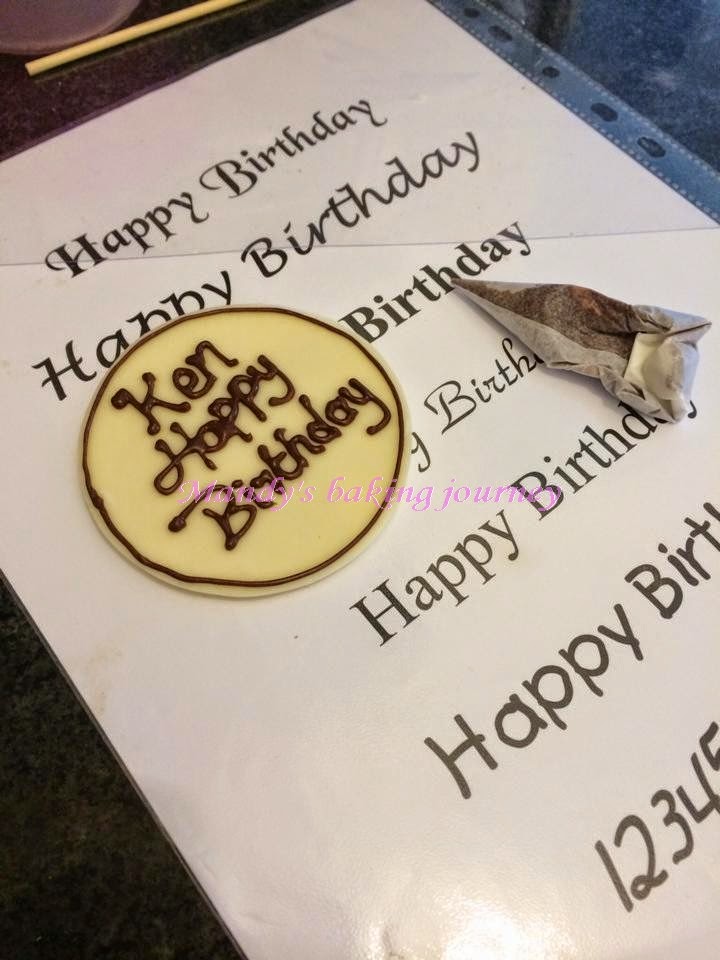 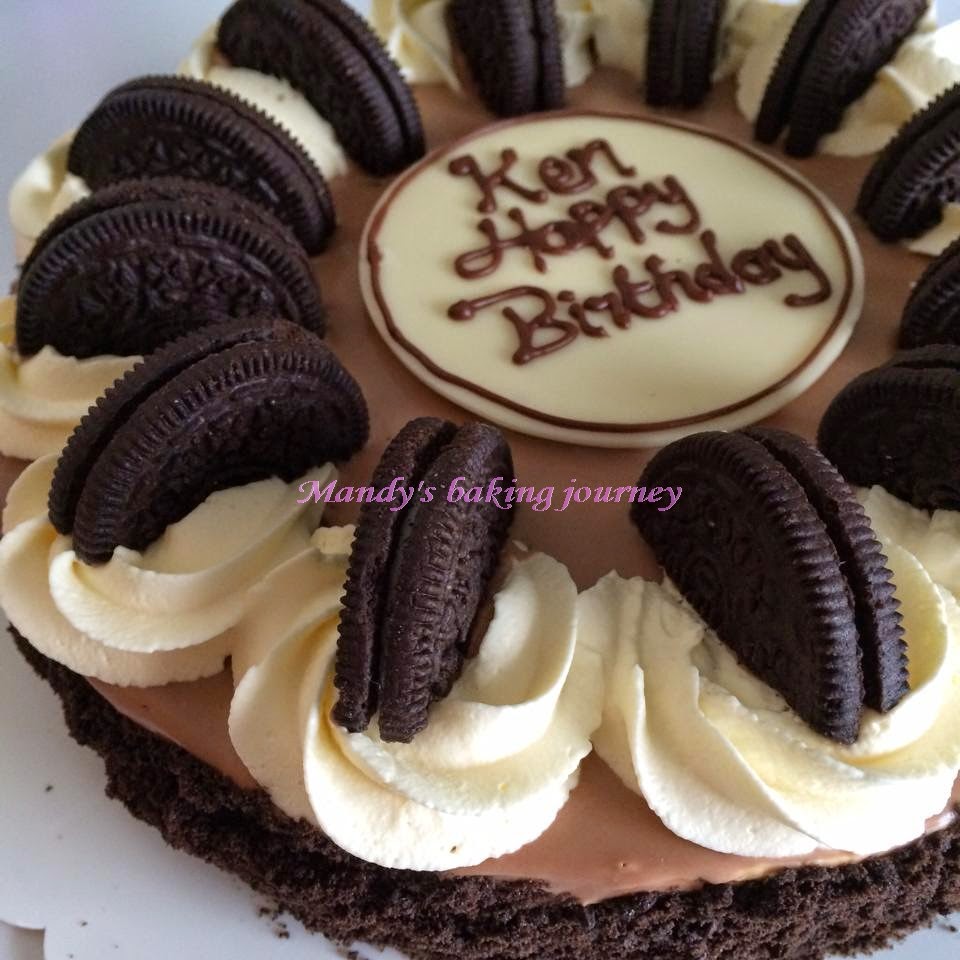 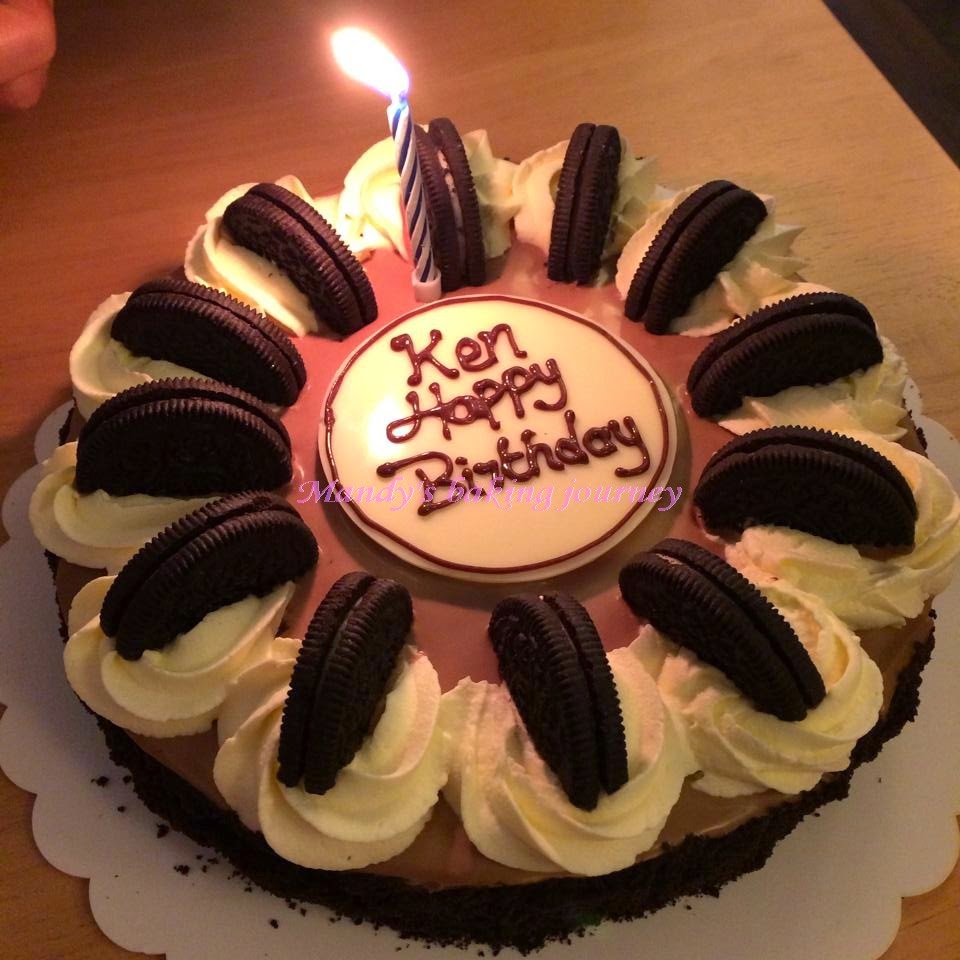 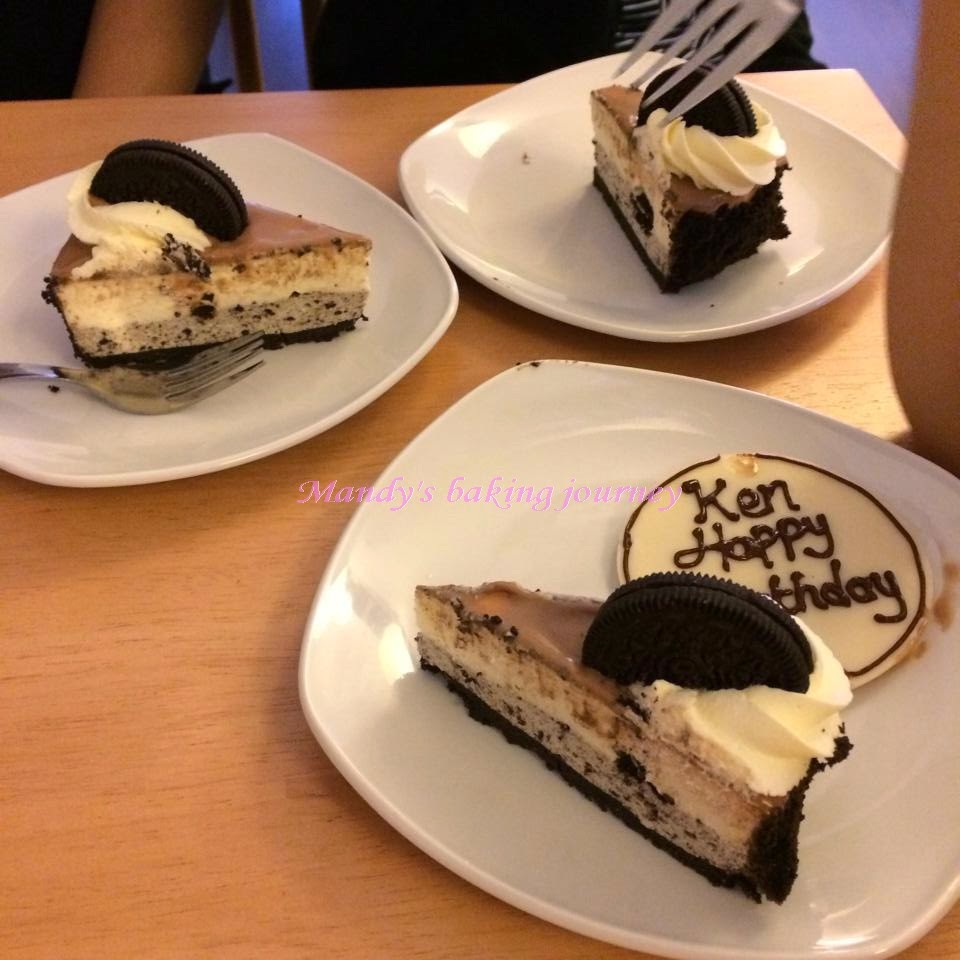 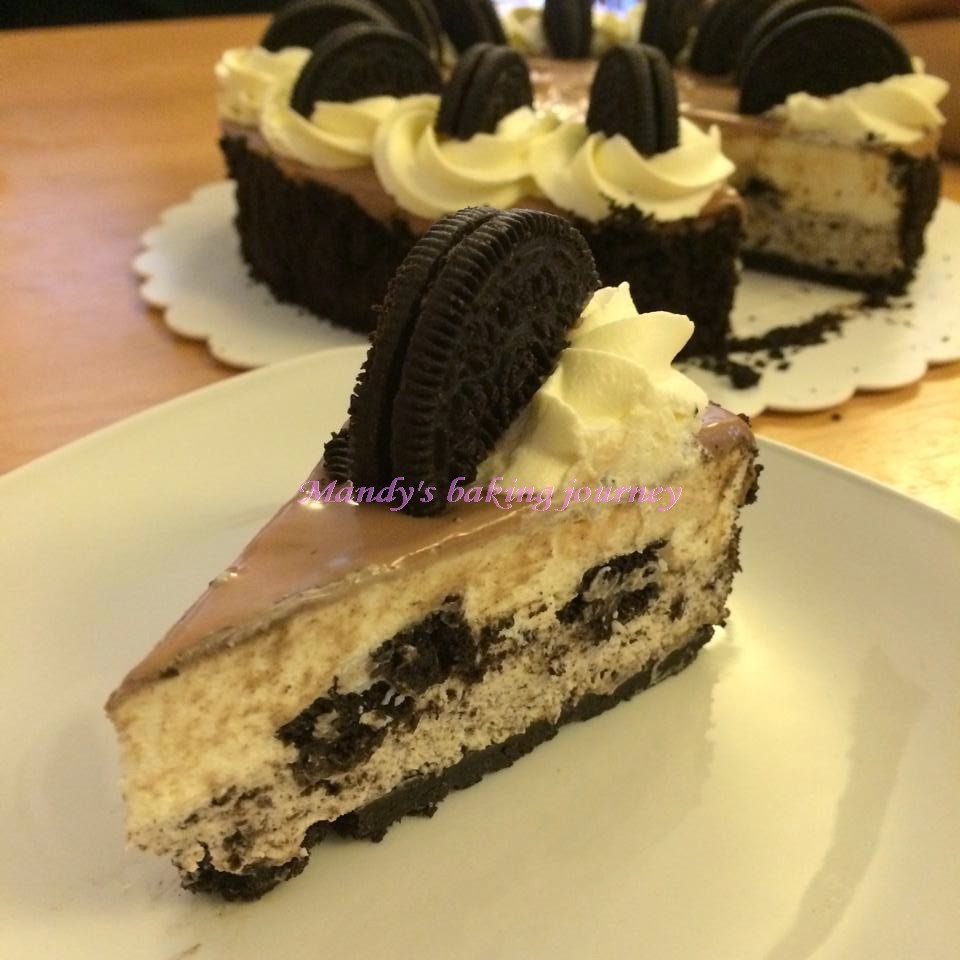 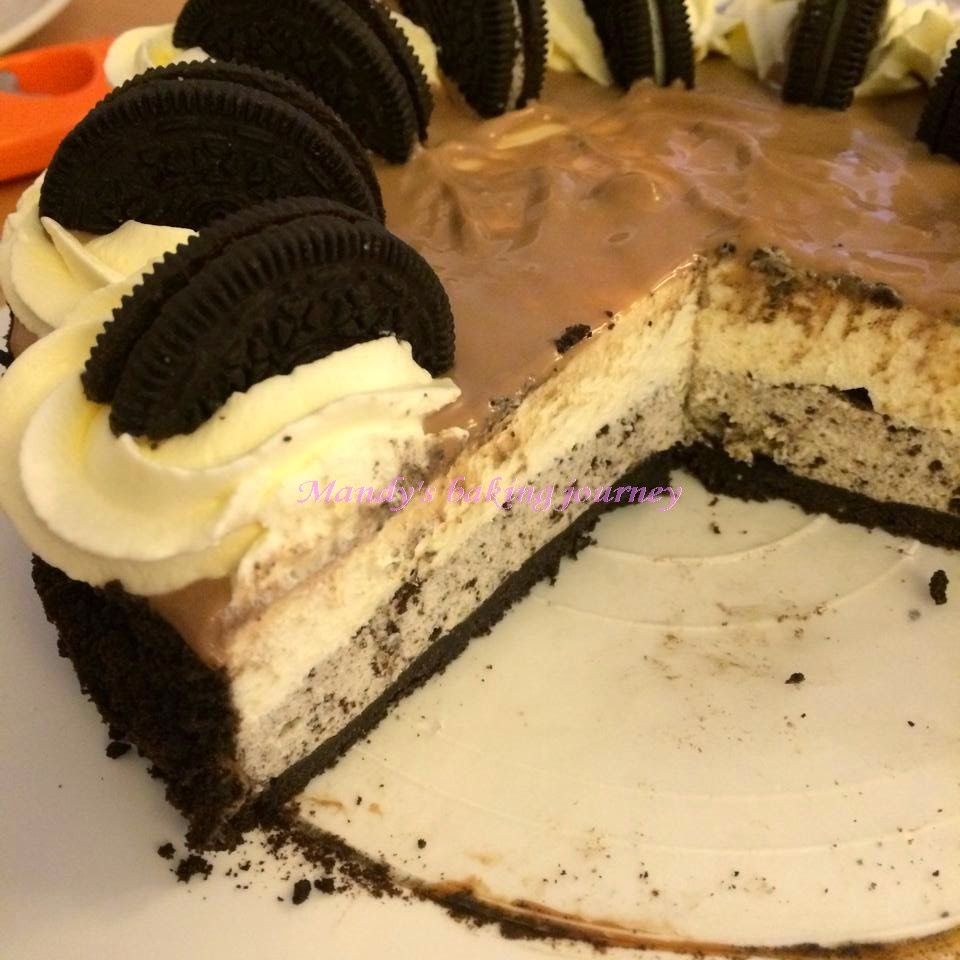 Email ThisBlogThis!Share to TwitterShare to FacebookShare to Pinterest
Labels: Cheesecake 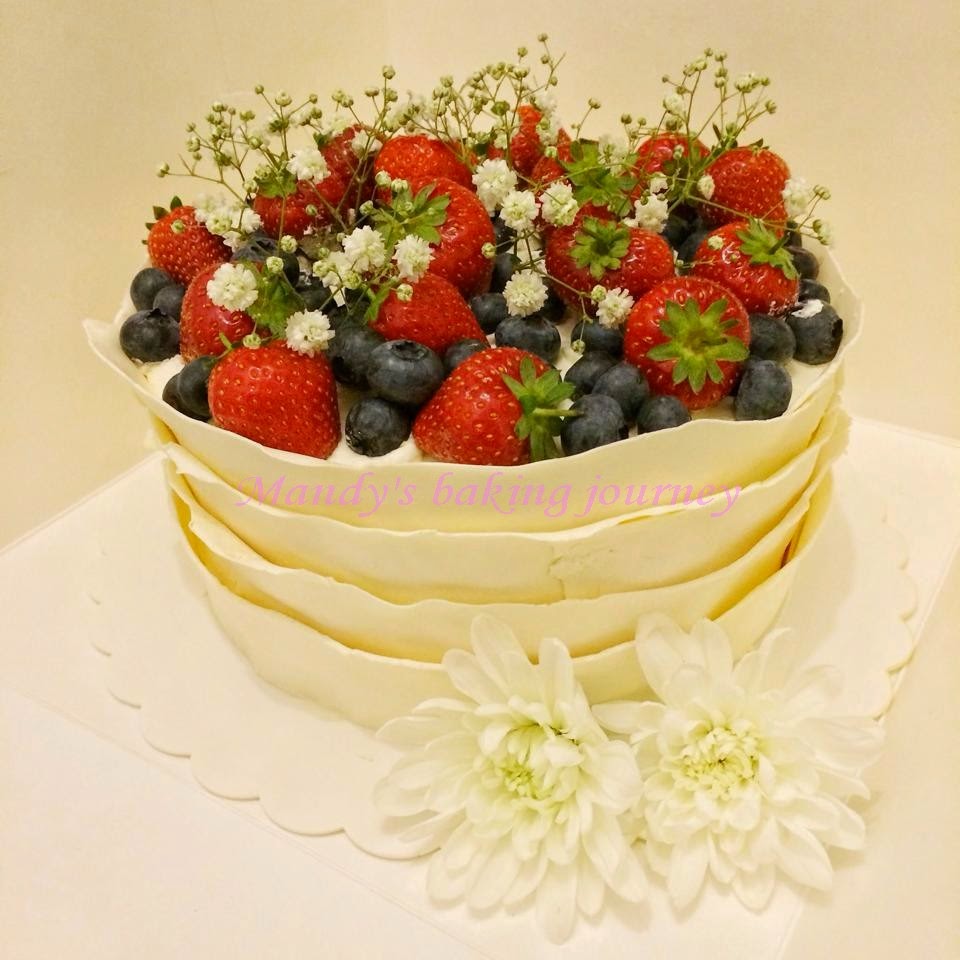 This year it is me and my hubby's 19th Wedding Anniversary.
I wanted to try a naked cake as it's the latest trend for Weddings and Anniversary's but hubby say they look terrible. Stuck with ideas, I saw a photos of a cake with flowers. I thought it would be nice to keep it a romantic theme. I wanted to add ruffles and made white modelling chocolates to wrap around a pink sponge layered cake.  Though the cake is a bit small, it was perfect size for me and my little family. I think this cake would look amazing if it had a bottom tier.  Maybe I will make something similar or a 3 tier cake next year for our 20th Anniversary.
Please be very careful when using fresh flowers on your cakes, I wrapped the stem with foil before I put it in.  Have been advise that using fresh flowers isn't safe and I have taken these out afte the photos were taken. 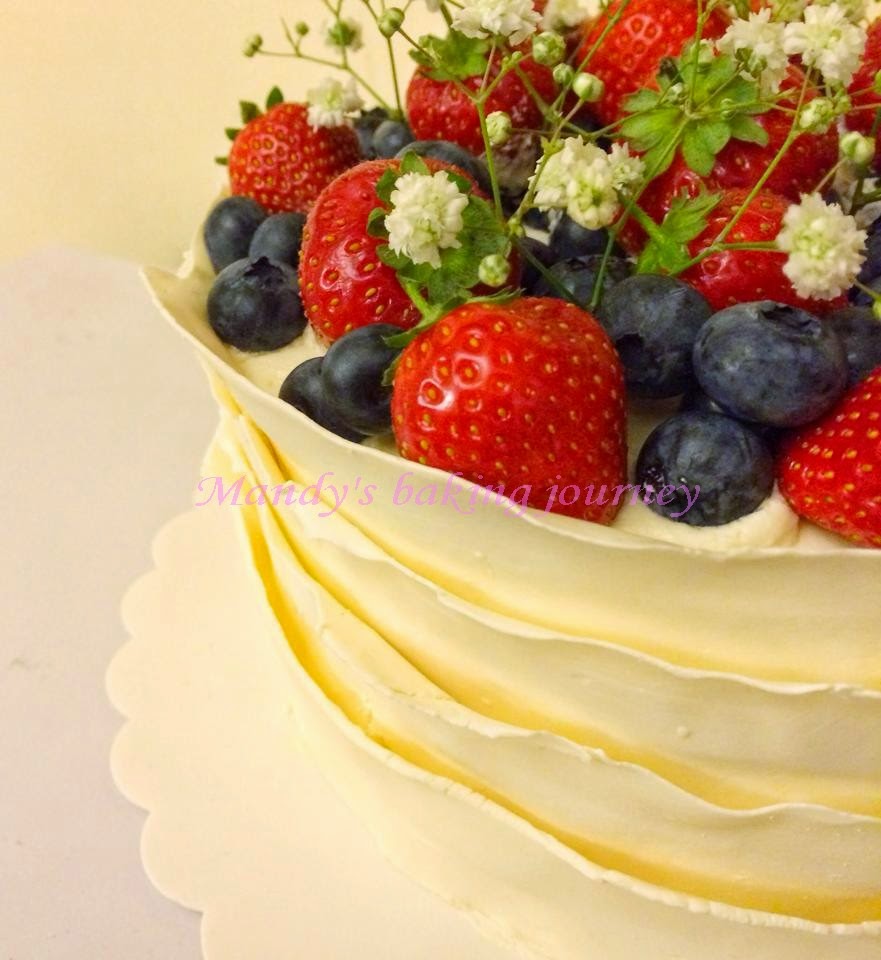 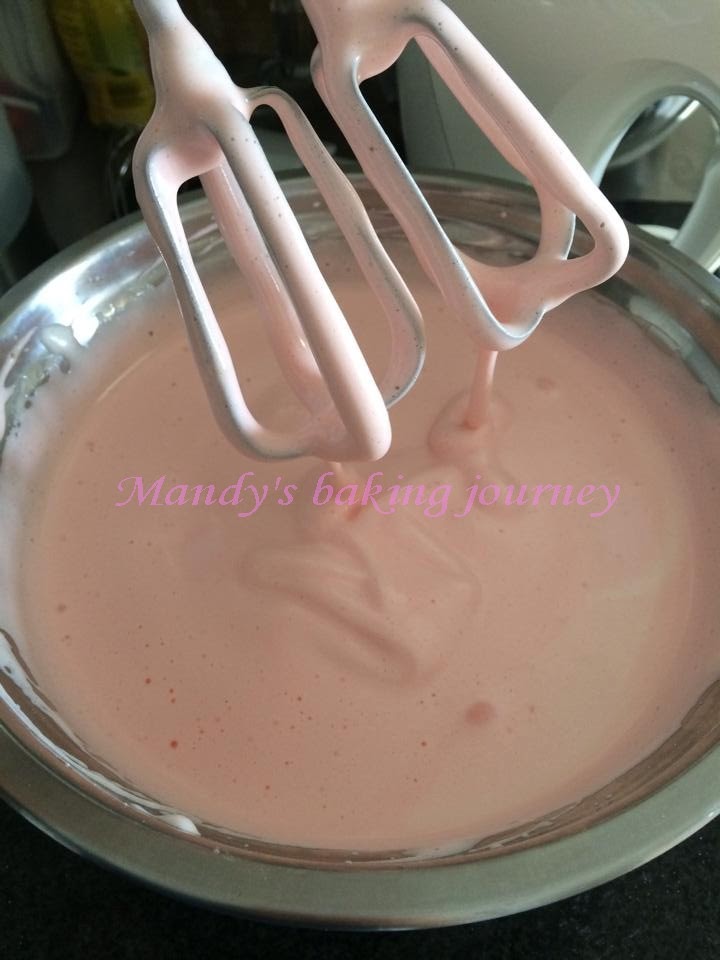 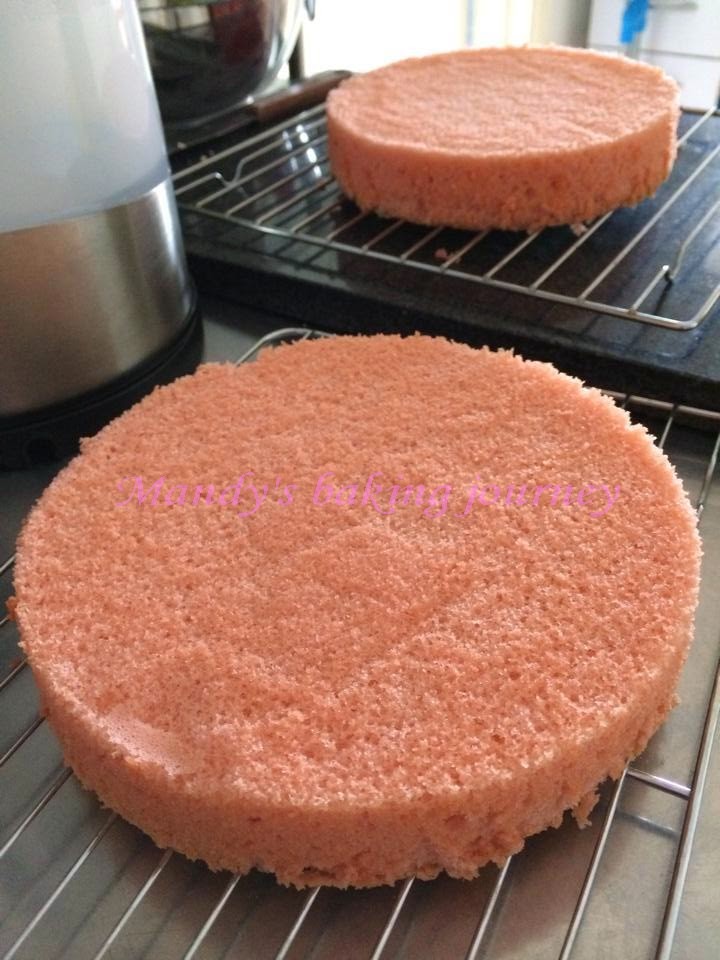 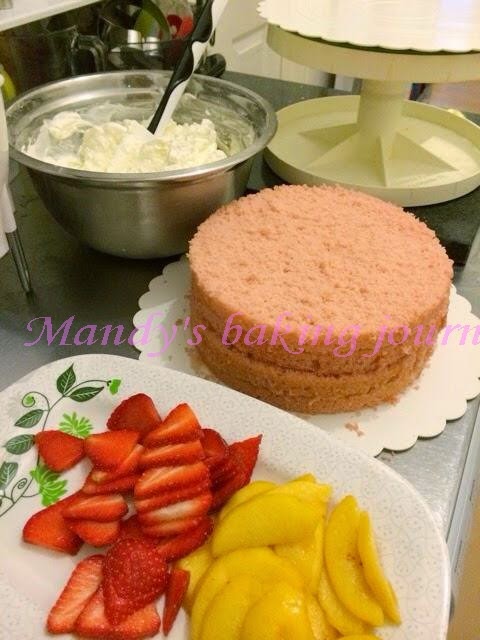 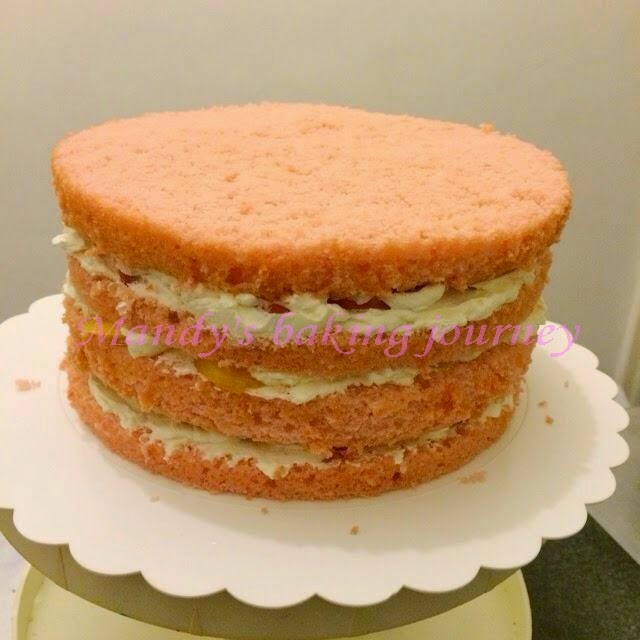 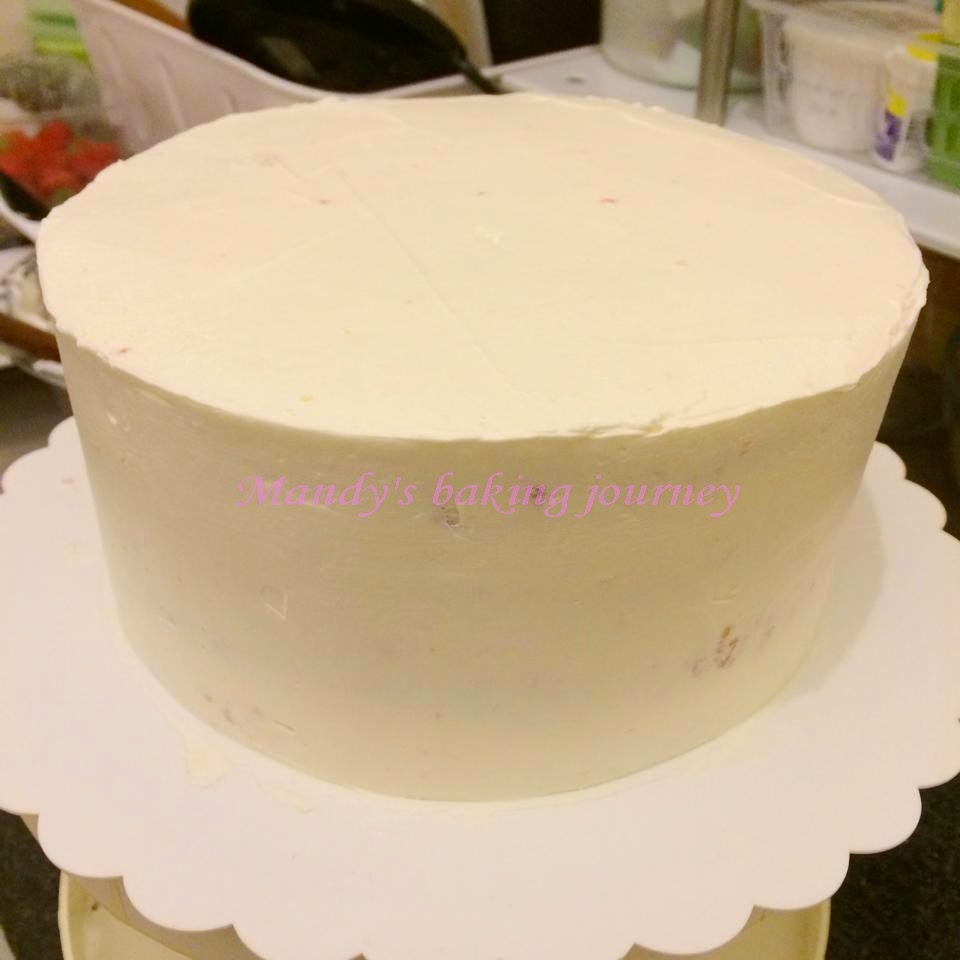 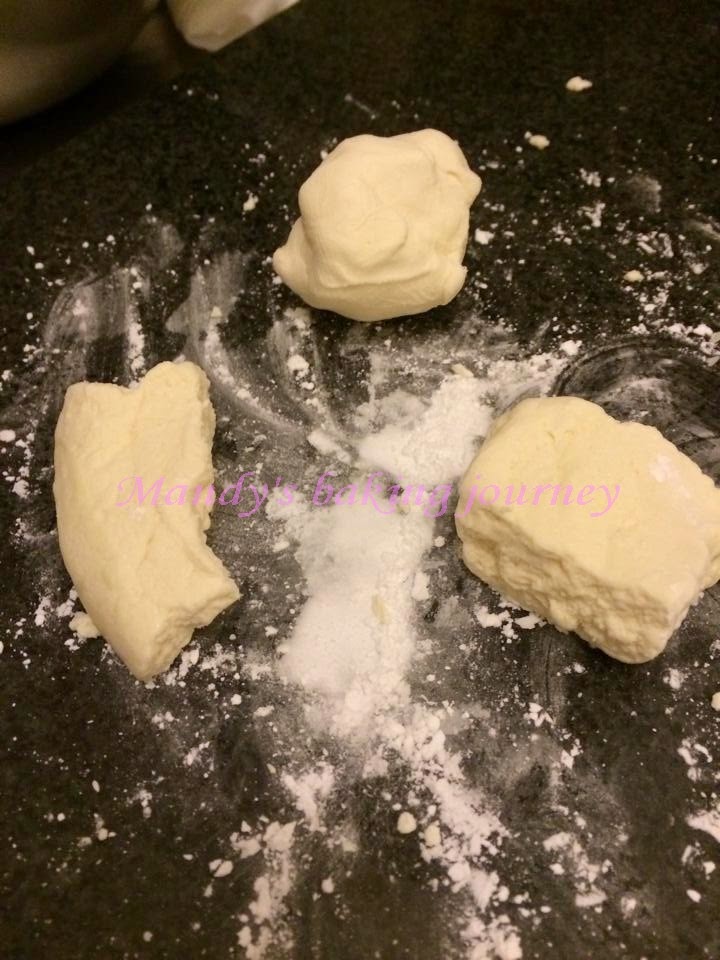 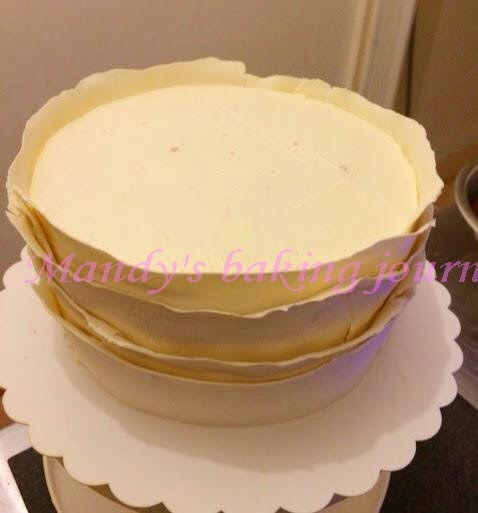 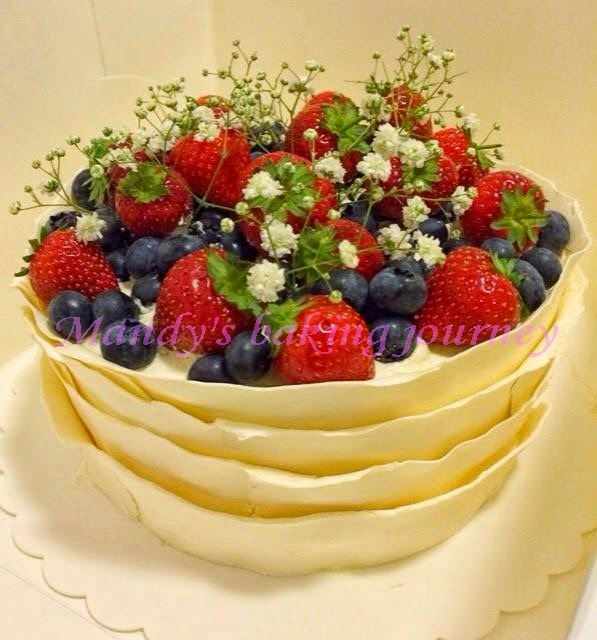 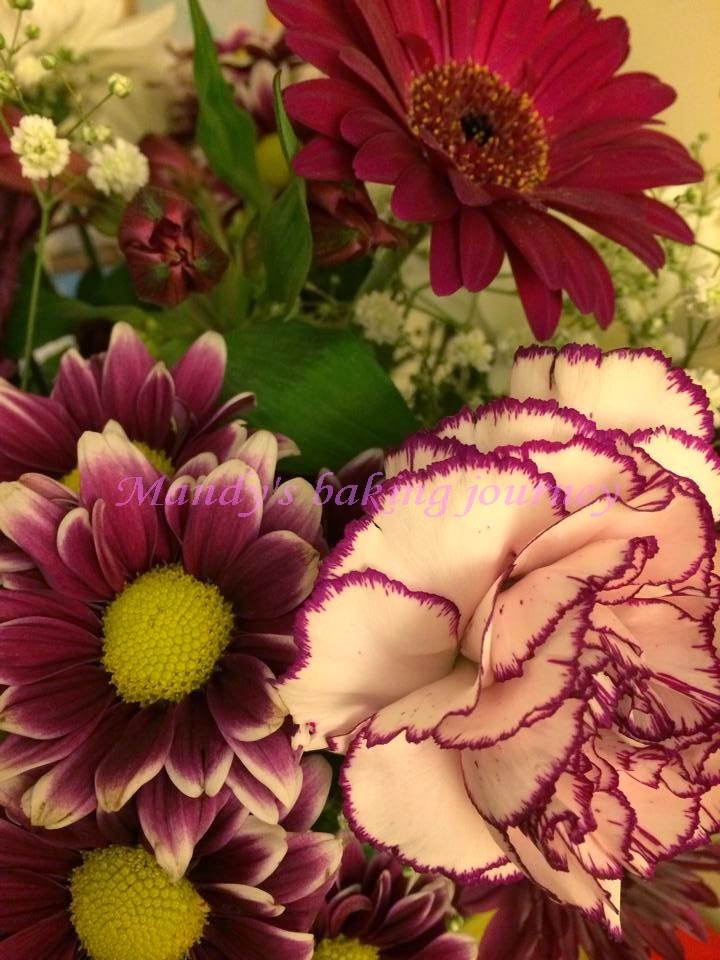 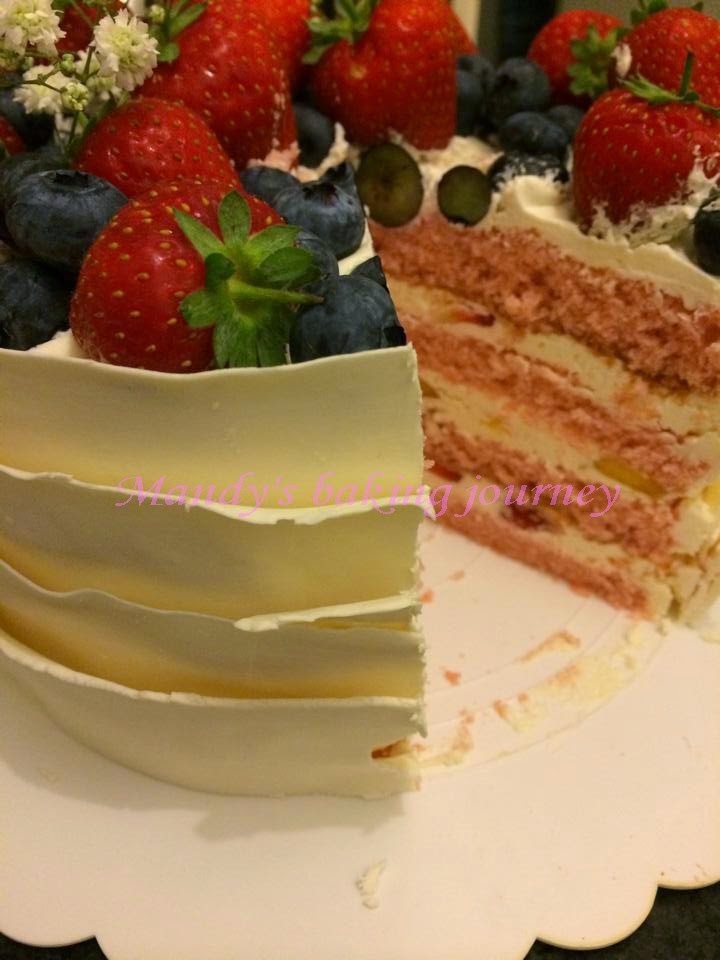 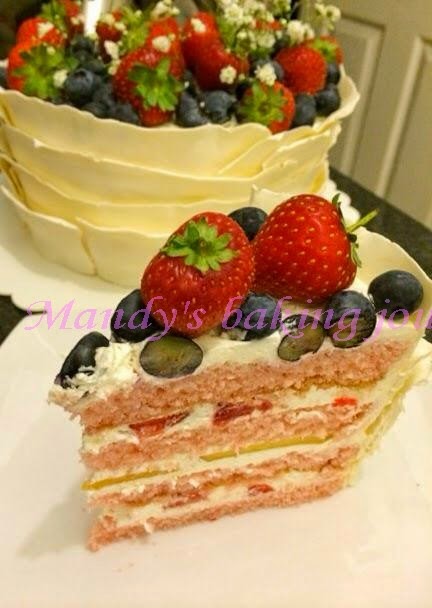 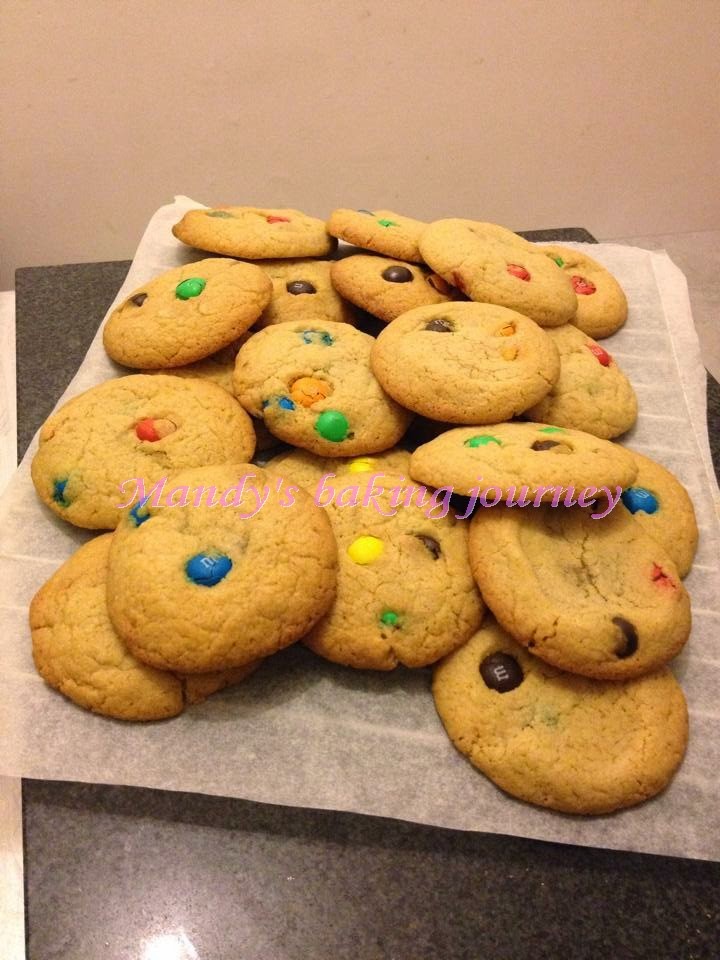 I have totally forgot about updating this cookies recipe, I made this after my kids demand for cookies in the supermarket. The kids have been off school for the summer holidays, so food shopping means taking them with me. We always come home with lots of junk food.
I rememeber that we had a bag of M&Ms at home so rather buy the cookies, I decided to make it when we got in.

These are really easy to make and the kids had fun helping me.
Well, that did help kill some time too. 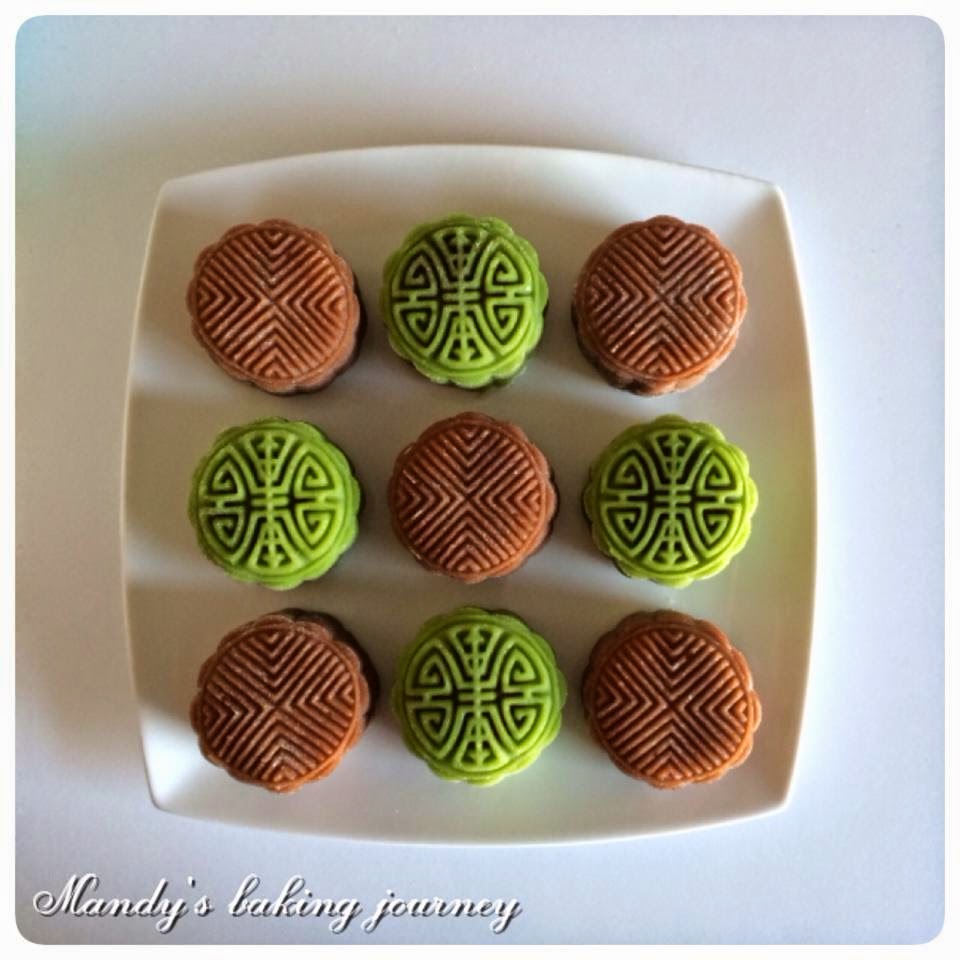 It's here!! Mid Autumn festival. Have you made moon cakes yet?
This year I wanted to try something different apart from the traditional moon cakes.
You can find my traditional moon cake post here.
A fellow Blogger Jenny Ong, which I have been in touch with lately, have shared with me one of her Snow skin moon cake recipe. As her blog is in Chinese which I can't read, she kindly translated her recipe in English for me and have given me the confidence to try it.
And the results were amazing!!
Here is Jenny's Snow skin moon cake recipe link
Read more »
Posted by Unknown at 18:08 5 comments: Links to this post 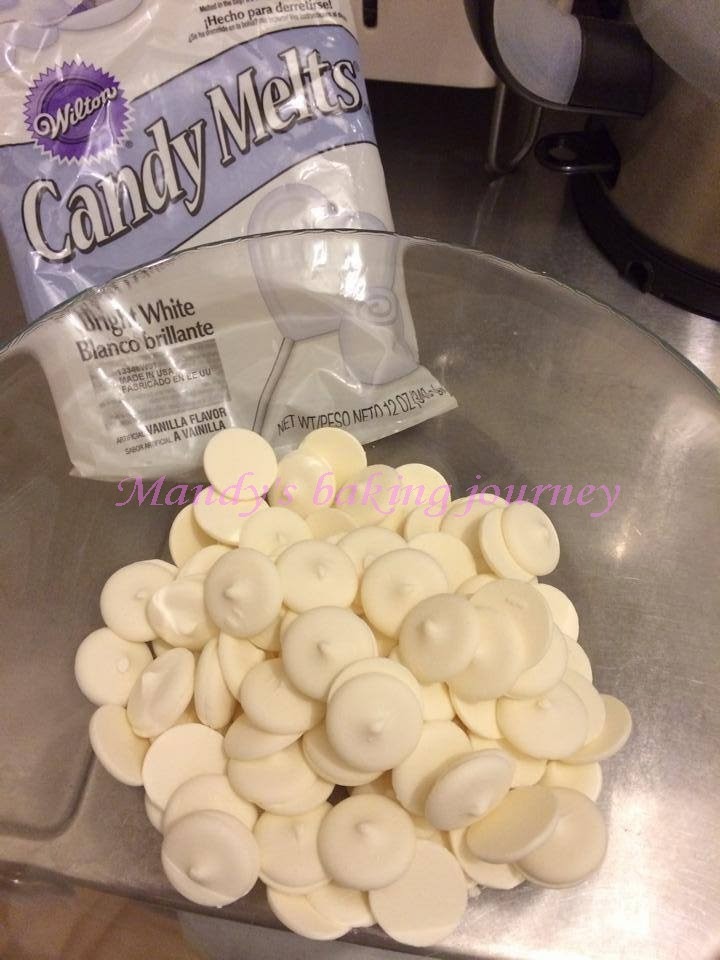 I have found the next best thing for my cream cake decorations.
White modelling chocolates. 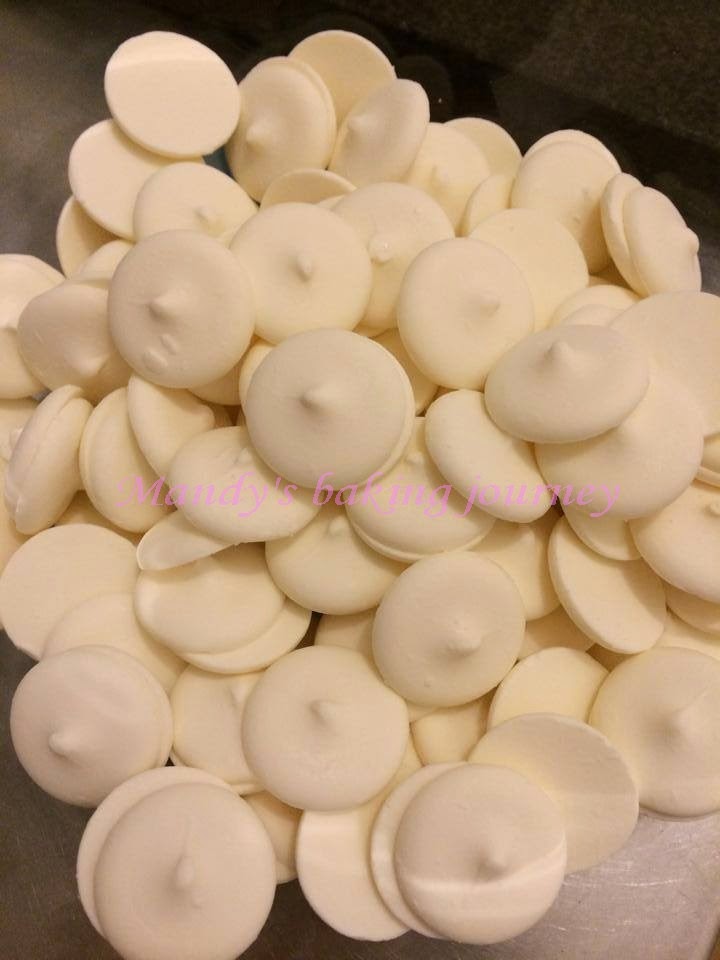 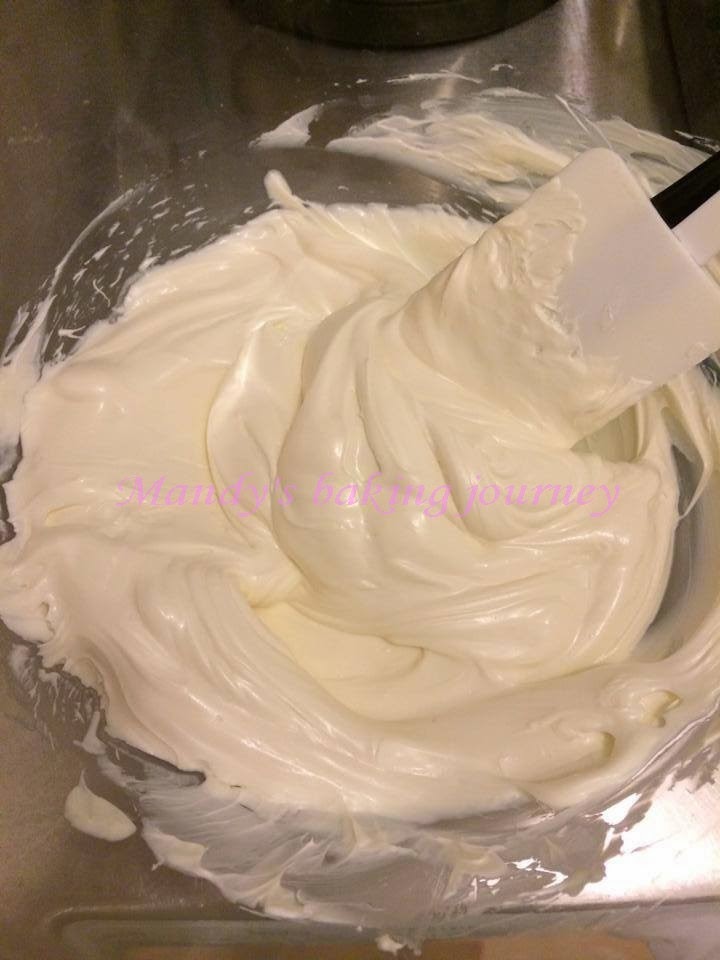